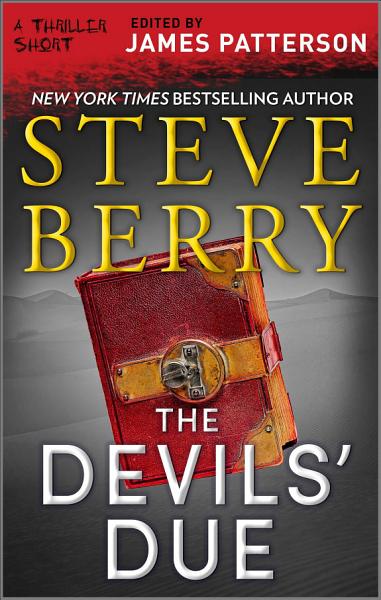 Experience a heart-pumping and thrilling tale of suspense! Originally published in THRILLER (2006), edited by #1 New York Times bestselling author James Patterson. In this alternative-history-with-a-twist Thriller Short, New York Times bestselling writer Steve Berry explores one of Cotton Malone’s early missions, from a time when Malone was still employed as one of the Magellan Billet’s twelve agents. Malone is sent on a mission to a small, central Asian country run by an enigmatic dictator, Yossef Sharma, whose alliance with the United States must be kept under wraps. It’s not a mission Malone enjoys, since Sharma has a penchant for burning books. Things get even more interesting when Sharma connects Malone with the world’s most infamous criminal, a man who wants to surrender. Things are not always what they seem, and Malone will need Sharma’s help if he plans to set things right and give the devil his due. Don’t miss any of these exciting Thriller Shorts: James Penney’s New Identity by Lee Child Operation Northwoods by James Grippando Epitaph by J. A. Konrath The Face in the Window by Heather Graham Kowalski’s in Love by James Rollins The Hunt for Dmitri by Gayle Lynds Disfigured by Michael Palmer and Daniel Palmer The Abelard Sanction by David Morrell Falling by Chris Mooney Success of a Mission by Dennis Lynds The Portal by John Lescroart and M. J. Rose The Double Dealer by David Liss Dirty Weather by Gregg Hurwitz Spirit Walker by David Dun At the Drop of a Hat by Denise Hamilton The Other Side of the Mirror by Eric Van Lustbader Man Catch by Christopher Rice Goodnight, Sweet Mother by Alex Kava Sacrificial Lion by Grant Blackwood Interlude at Duane’s by F. Paul Wilson The Powder Monkey by Ted Bell Surviving Toronto by M. Diane Vogt Assassins by Christopher Reich The Athens Solution by Brad Thor Diplomatic Constraints by Raelynn Hillhouse Kill Zone by Robert Liparulo The Devils’ Due by Steve Berry The Tuesday Club by Katherine Neville Gone Fishing by Douglas Preston and Lincoln Child

The Devil’s Due (A Sherlock Holmes Adventure)

Authors: Bonnie MacBird
Categories: Fiction
Type: BOOK - Published: 2019-10-10 - Publisher: HarperCollins
After Art in the Blood and Unquiet Spirits, Holmes and Watson are back in the third of Bonnie MacBird’s critically acclaimed Sherlock Holmes Adventures, written in the tradition of Conan Doyle himself.

Authors: Ali Vali
Categories: Fiction
Type: BOOK - Published: 2017-01-17 - Publisher: Bold Strokes Books Inc
In the sixth book of the Devil Series, Cain and Emma are now married and have returned to a Katrina-ravaged New Orleans to await the birth of their third child. Cain’s wedding gift to Emma was peace of mind with the death of Juan Luis and his mother, but Anthony

Devil's Due Essays of the Elite

Authors: E. R. Vernor
Categories: Fiction
Type: BOOK - Published: 2016-08-19 - Publisher: Createspace Independent Publishing Platform
The Devil's Due Essays of the Elite is a collection of articles on Satanism from respected contributors in their own words. Long perceived as Devil Worshippers by the mainstream media and Hollywood, the actual members are in fact movers and shakers within business, law enforcement, the armed services and more.

Authors: Taylor Anderson
Categories: Fiction
Type: BOOK - Published: 2017-06-13 - Publisher: Penguin
New York Times bestselling author Taylor Anderson continues the thrilling Destroyermen series of alternate history and military strategy, as the conflict is about to become terrifyingly personal.... Captain Matt Reddy and the crew of the USS Walker have been fighting for their lives ever since their ship was swept from

Authors: Jenna Black
Categories: Fiction
Type: BOOK - Published: 2009-12-03 - Publisher: Hachette UK
Things aren't going well for exorcist Morgan Kingsley. She's been betrayed by the boyfriend of her dreams, her brother has been repossessed, and she's unable to escape from the hunky demon who shares her body. All Morgan wants is to curl up and avoid reality for a while. But she