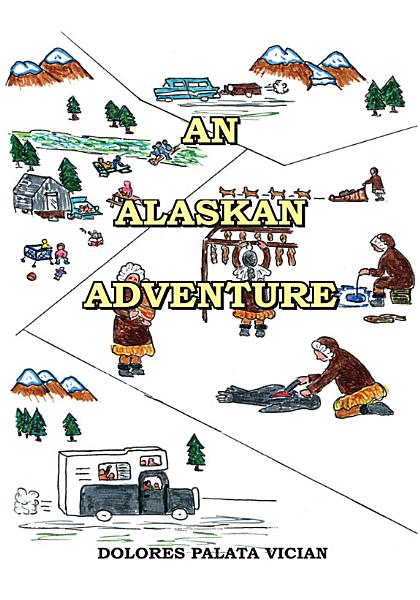 From the fall of 1962 to the spring of 1963, my husband, Ed, our five children and myself lived in an Eskimo village on the vast tundra land of Alaska. We were thousands of miles from our suburban home outside of Chicago, IL. Ed had accepted a job as the superintendent of the largest state operated school in Alaska. We were living in an Eskimo village, Bethel, so named by the Moravian missionaries who had established a church on the Kuskokwin River many years before. (The Kutskokwin River is the second largest river in Alaska, surpassed only by the mighty Yukon River) As for Bethel, it was over four hundred miles from Anchorage, Alaska, on the same line of longitude as Honolulu, Hawaii. By November, it could only be reached by airplane - weather permitting. This is the story of our year in Alaska, living in a Quonset hut, situated next to the school. It is based on a daily journal I kept of our experiences there. We had left behind many conveniences such as an automatic washer, dryer and dish washer. Instead we had accepted a comparatively primitive way of life. I cooked on an oil-burning stove, which also served as a space heater for the front of the Quonset hut. Our water had to be delivered by truck. Our bathroom had a chemical toilet, called a "honey bucket," which needed to be emptied several times a week. Our accomodations were cramped compared to the split-level home we had left in Illinois. However, there were many compensations. We soon realized that we were surrounded by many kind and caring people. Although we led a simple life in our year in the Alaskan Eskimo village, the experience was an enriching one for the entire family. This is that story.

Authors: Dolores Palata Vician
Categories: Biography & Autobiography
Type: BOOK - Published: 2004 - Publisher: Trafford Publishing
From the fall of 1962 to the spring of 1963, my husband, Ed, our five children and myself lived in an Eskimo village on the vast tundra land of Alaska. We were thousands of miles from our suburban home outside of Chicago, IL. Ed had accepted a job as the

Authors: Jiya Singh
Categories: Fiction
Type: BOOK - Published: 2016-12-06 - Publisher: Xlibris Corporation
Twelve-year-old Alyssa Chamber has always wanted to go to Alaska. And one day, her mom tells her that her family and her best friend, Ava Smith, and her family will all be going to Alaska. Get ready to pack your bags and join the Chambers and Smiths as they bring

Authors: Frederick James Currier
Categories: Biography & Autobiography
Type: BOOK - Published: 2018-08-01 - Publisher: Publication Consultants
As the descendant of early miners, a grandfather who prospected for gold in the Fairbanks area in 1908 and a father who mined from the 1920s through the early 1940s, my interest and fascination with Frederick Currier's manuscript was easily spiked. Currier's quest for gold from 1893 into the 1900s

Authors: Alan R. Adaschik
Categories: Education
Type: BOOK - Published: 2014-02 - Publisher: Author House
Alan Adaschik's dream was to visit Alaska; America's last frontier and a place which abounds with wildlife and unspoiled wilderness. Upon retirement, Al and his wife Gayle sold everything and bought a thirty-seven foot Damon Intruder motor home to make his dream a reality. "An Alaskan Adventure" is a narrative

Minstrel of the Yukon, an Alaskan Adventure

Authors: Glen Guy
Categories: Fiction
Type: BOOK - Published: 2012-11 - Publisher: Tate Pub & Enterprises Llc
The current was pulling at Dusty's legs. It was a sucking feeling, and he knew that it was about to pull him under and there wasn't a thing he could do to stop it. The cold was numbing, and his arms felt like lead. He struggled for one last deep