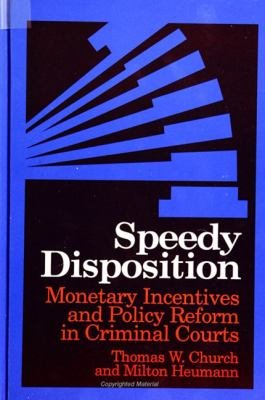 Monetary incentives are increasingly seen as attractive alternatives to strict regulatory approaches for achieving objectives. This book examines one of the most ambitious attempts to use monetary incentives in the criminal justice system: New York Citys $8.25 million Speedy Disposition Program (SDP). New York City officials introduced SDP as an incentive scheme to encourage the citys six District Attorneys to accelerate the disposition of those criminal cases that most contributed to the citys chronic jail overcrowding problem. Substantial financial rewards would be given to those DAs offices that managed to dispose of their oldest felony cases, those cases involving long-term detainees. The implementation of SDP in New York City  and the responses of the citys district attorneys to it  provides fascinating tales that teach much about innovation in criminal justice, about new approaches to court reform and delay reduction, and more generally, about the uses of monetary incentives as policy tools. Further, the program provides a rich source for analysis of the considerations that should go into the design of incentive programs, and into the contextual factors that argue for their applicability in other areas.