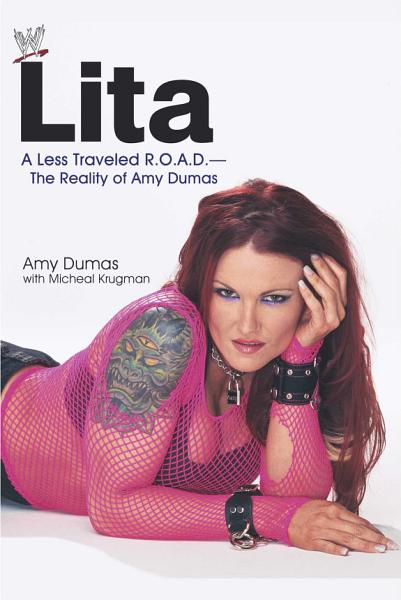 Lita™ -- see her just once in the ring and you can never forget it. The breathtaking off-the-top-rope fearlessness that she shows keeps you on the edge of your seat. You simply can't believe she's going to be able to pull off the move, and then Lita takes it to the next level. That's her reality, that's why she is a WWE™ Superstar. Taking unexpected risks, daring to do what no one has done before, that's the reality of Amy Dumas, the remarkable woman behind Lita. Even as a young girl, Amy was determined to challenge herself and the world around her. She found personal freedom in the hardcore punk rock scene of the nineties. The positive force of the music and culture helped define the reality of Amy Dumas. Her willingness to try anything once set her on the path to World Wrestling Entertainment.™ Captivated by the high-flying style of the luchadors she saw on television, Amy was hungry to discover more about them. She just had to learn how they did those amazing moves. With only a guidebook for a companion, Amy set out for Mexico City where she was quickly invited into the secret world of lucha libre, Mexico's unique brand of professional wrestling. She returned to the States, resolute in her goal to make it as a professional wrestler. Amy found people who saw her determination and her heart, and agreed to train her. As her skills improved, she began traveling the highways and byways of America, working night after night in independent promotions around the country. Along her journey, Amy met an assortment of colorful characters as well as a number of wrestlers who would prove influential in her career. Among them were two local North Carolina stars who had just signed with WWE -- Matt and Jeff Hardy. Amy formed an instant bond with the dynamic Hardy Boyz,™ whose spectacular style and high-flying bravado inspired her own bold in-ring style. It wasn't long before Amy -- now christened Lita -- joined Matt and Jeff in WWE, and the three friends became international sensations as Team Extreme.™ Lita proved a true pioneer in women's wrestling, daring to get in the ring with the boys -- including Triple H,™ Stone Cold Steve Austin™ and The Rock® -- and never backing down. It took a broken neck suffered on the set of a television series to stop her...but only temporarily. Lita: A Less Traveled R.O.A.D -- The Reality of Amy Dumas is the stirring tale of one young woman's amazing journey to the top of the wild, wonderful world of WWE.™

Authors: Michael Krugman, Amy Dumas
Categories: Biography & Autobiography
Type: BOOK - Published: 2010-05-11 - Publisher: Simon and Schuster
Lita™ -- see her just once in the ring and you can never forget it. The breathtaking off-the-top-rope fearlessness that she shows keeps you on the edge of your seat. You simply can't believe she's going to be able to pull off the move, and then Lita takes it to

Authors: Jervey Tervalon
Categories: Fiction
Type: BOOK - Published: 2004-05-25 - Publisher: Simon and Schuster
In this sequel to his acclaimed "urban masterpiece" (The Philadelphia Inquirer), the national bestseller Dead Above Ground, Jervey Tervalon's unforgettable heroine, Lita Du Champ, is at loose ends, trying to hold house and home together. Ten years after she, her husband, their children, and her twin sisters moved to Los

Authors: Carl Antonucci, Sharon Clapp
Categories: Language Arts & Disciplines
Type: BOOK - Published: 2017-04-20 - Publisher: Rowman & Littlefield
The LITA Leadership Guide will help librarians at every level of the career ladder and will supplement leadership and skill-based training workshops. Library leadership teams interested in the development of their staff as a means of improving their organizational performance will find it to provide context for growth, training, and

Authors: Breanne A. Kirsch
Categories: Language Arts & Disciplines
Type: BOOK - Published: 2018-02-13 - Publisher: Rowman & Littlefield
The LITA Guide to No- or Low-Cost Technology Tools for Libraries provides a practical guide on how to find and use technology tools for a variety of purposes in libraries and, more broadly, in education. Each topic showcases two technology tools in detail and discusses additional tools and provides examples

Authors: Alexander Obrzut
Categories: Computers
Type: BOOK - Published: 2013-05 - Publisher: Lulu.com
Lita OS and UNISEQ is a vital addition to any programmers library. The book has a fully working operating system (text based) inside with boot sector listed for a floppy diskette. UNISEQ is at the start of the programming manual and is a means of base such as base 2

Authors: Mary Mallery
Categories: Language Arts & Disciplines
Type: BOOK - Published: 2015-04 - Publisher: American Library Association
Most library disaster plans focus on response and recovery from collection and facilities disasters, such as fire and floods. But because technology is becoming ever more integral to libraries’ role in their communities, any interruption in service and resources is a serious matter. A disaster’s effect on internet and social

Getting Started with Demand-Driven Acquisitions for E-books: A LITA Guide

Authors: Theresa S. Arndt
Categories: Language Arts & Disciplines
Type: BOOK - Published: 2015-03-05 - Publisher: American Library Association
Thousands of e-books are published each year; and rather than holding steady, e-book prices are rising—some 3.5% this year alone. With so many titles out there, how do you know which ones will actually circulate? Demand-driven acquisition (DDA) may be the answer for your library, and getting started needn’t be