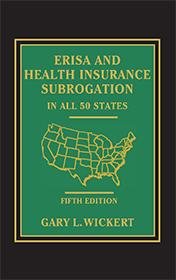 ERISA and Health Insurance Subrogation In All 50 States is the most complete and thorough treatise covering the complex subject of ERISA and health insurance subrogation ever published. NEW TO THE FIFTH EDITION! • Updated To Include All The Newest Case Law! • Updated To Include Medicaid Subrogation and Preemption of FEHBA ! • New Plan Language Recommendations! • Complete Health Insurance Subrogation Laws In All 50 States • Covers The Application of ERISA In Every Federal Circuit The Fifth Edition of ERISA and Health Insurance Subrogation In All 50 States has been completely revised, edited, and reorganized. This was partly to reflect the new direction recent case decisions have taken regarding health insurance subrogation as well as the crystallization of formerly uncertain and nebulous areas of the law which have now received some clarity. An entirely new chapter entitled, “What Constitutes Other Appropriate Equitable Relief?” has been added and replaces the old Chapter 9, which merely dealt with Knudson and Sereboff. The new edition introduces new state court decisions addressing the issue of causation and whether and when a subrogated Plan seeking reimbursement must prove that the medical benefits it seeks to recover were causally related to the original negligence of the tortfeasor. An entirely new section was added concerning the subrogation and reimbursement rights of Medicare Advantage Plans, a statutorily-authorized Plan which provides the same benefits an individual is entitled to recover under Medicare. This includes recent case law which detrimentally affects the rights of such Plans to subrogate. Also added to the new edition is additional law and explanation regarding Medicaid subrogation, including the differentiation between “cost avoidance” and “pay and chase” when it comes to procedures for paying Medicaid claims. Significant improvements have been made to suggested Plan language which maximizes a Plan’s subrogation and reimbursement rights. The suggested language stems from recent decisions and developments in ERISA and health insurance subrogation from around the country since the last edition. The new edition has been completely reworked both in substance and organization. Recent case law has necessitated consolidation of several portions of the book and elimination or editing of others. A new section entitled “Liability of Plaintiff’s Counsel” has been added, which provides a clearer exposition on the laws applicable and remedies available when plaintiff’s attorneys and Plan beneficiaries settle their third-party cases and fail to reimburse the Plan. Also new to the book are recently-passed anti-subrogation measures such as Louisiana’s Senate Bill 169, § 1881, which states that no health insurer shall seek reimbursement from automobile Med Pay coverage without first obtaining the written consent of the insured. The new edition also goes into much greater detail on the procedures for and law underlying the practice of removal of cases from state court to federal court, and the possibility of remand back to state court. This includes the Federal Courts Jurisdiction and Venue Clarification Act of 2011, effective Jan. 6, 2012, which amended federal removal, venue, and citizenship determination statutes in very significant ways. The new edition also delves into, for the first time, the role which the federal Anti-Injunction Act plays when beneficiaries sue in state court to enforce the terms of an ERISA Plan, while the Plan files suit in federal court seeking an injunction against the state court action. New case law and discussion on preemption of FEHBA subrogation and reimbursement claims have been added to Chapter 10 in the wake of new decisions regarding same.

ERISA and Health Insurance Subrogation in all 50 States - 5th Edition

Authors: Gary L. Wickert
Categories: Law
Type: BOOK - Published: 2013-01-01 - Publisher: Juris Publishing, Inc.
ERISA and Health Insurance Subrogation In All 50 States is the most complete and thorough treatise covering the complex subject of ERISA and health insurance subrogation ever published. NEW TO THE FIFTH EDITION! • Updated To Include All The Newest Case Law! • Updated To Include Medicaid Subrogation and Preemption

Authors: Gary L. Wickert
Categories: Law
Type: BOOK - Published: 2012-04-01 - Publisher: Juris Publishing, Inc.
Workers' compensation subrogation continues to change and adapt, as trial lawyers prod its weak points and capitalize on confusing areas of the law. There have been numerous changes in workers' compensation statutes and case law in many states since the last edition. This edition includes an exhausting survey and detailed

Authors: Gary L. Wickert
Categories: Law
Type: BOOK - Published: 2014-11-01 - Publisher: Juris Publishing, Inc.
Automobile Insurance Subrogation: In All 50 States is the most thorough, comprehensive, and ambitious anthology of subrogation-related legal information and insurance resources ever put to paper. It is the last and most anticipated of the subrogation trilogy, and a book which will serve as the “bible” for any insurance company