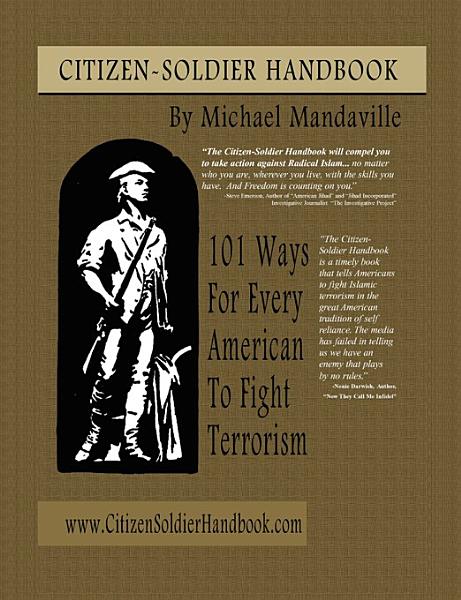 "Citizen Soldier Handbook: 101 Ways for Every American to Fight Terrorism" is a How-To Guide for Americans to fight the greatest threat to Western Civilization - Radical Islam. Terrorists declared every man, woman and child to be a target. We have no choice but to become Citizen Soldiers. The Handbook's Five sections - Morale, Intelligence, Physical Training, Mental Training and Action - encourage Americans of all backgrounds, ages, and skills to do their part against Radical Islam. The Citizen Soldier Handbook is a Call to Arms in the spirit of Citizen Soldiers - at Lexington and Concord firing the 'Shot Heard Round the World' - brighten the glow of Freedom from the Torch of Liberty. --- ..". Citizen Soldier Handbook puts this power into the citizen's hands with knowledge about the threat of Radical Islam, how to empower yourself and how to use media to stop the threat of Radical Islam in the age of Information Warfare. This book will inspire you...." -John Ziegler Radio Show Host & Author "The Death of Free Speech" "We are engaged in a great war of Ideas - Freedom versus Tryanny, Democracy versus Islamic Totalitarianism. The weapon of ... is Information. As a writer, I understand the power of Ideas, Information and Humor. The Citizen-Soldier Handbook will help and inspire you, your friends, family, coworkers, fellow Americans to get the word out in dozens of ways." -Burt Prelutsky Former WGA President & Author "Conservatives Are from Mars, Liberals Are from San Francisco: 101 Reasons I'm Happy I Left the Left" "The Citizen-Soldier Handbook is an invaluable resource... at once an exhaustively researched compendium of strategies and a stirring reaffirmation of the meaning of citizenship, it is a clarion call to action in a time when too many have been lulled into a false sense of complacency." -Harry Stein - Author of "How I Accidentally Joined the Vast Right-Wing Conspiracy (and Found Inner Peace)' and is a Contributing Editor to "City Journal" ..".this is more than a handbook. It is a call to action. In this age of information and internet warfare, everyone can be a Citizen Soldier and everyone can join the fight. The Citizen Soldier Handbook will show you the way." -Brandon L. Millett Chairman and Co-Founder, "The GI Film Festival," Washington D.C. The Citizen Soldier Handbook's Five Sections has 101 Actions (even more if you include subheadings ) urging Americans to take action in their Lives, Communities and the World to fight Radical Islam. Morale - Believe in the Greatness of America and Fight For Her Intelligence - Learn about Radical Islam, its Roots, Adherents, Beliefs and Dangers Physical Training - As Physical Beings, We Must Be in Shape to Take Action Mental Training - Steel Yourself for the Mission Ahead. Take Action - Take Action With Suggestions, Ideas, Techniques, Methods and Resources, Organizations and More.... This Book is a Match to Light The Torch of Freedom that You - America's Citizen Soldier - Must Hold High to Stop the Encroaching Darkness. The Fight Is Yours."

Authors: Michael Mandaville
Categories: Political Science
Type: BOOK - Published: 2009-02 - Publisher: Dog Ear Publishing
"Citizen Soldier Handbook: 101 Ways for Every American to Fight Terrorism" is a How-To Guide for Americans to fight the greatest threat to Western Civilization - Radical Islam. Terrorists declared every man, woman and child to be a target. We have no choice but to become Citizen Soldiers. The Handbook's

Authors: Jonathan Matusitz
Categories: Political Science
Type: BOOK - Published: 2014-09-16 - Publisher: Rowman & Littlefield
The symbolic value of targets is what differentiates terrorism from other forms of extreme violence. Terrorism is designed to inflict deep psychological wounds on an enemy rather than demolish its material ability to fight. The September 11, 2001 attacks, for example, demonstrated the power of symbolism. The World Trade Center

I Can't Believe I'm Sitting Next to a Republican

Authors: Harry Stein
Categories: Biography & Autobiography
Type: BOOK - Published: 2010-12 - Publisher: Encounter Books
With biting wit and amusing personal anecdotes, Harry Stein’s I Can’t Believe I’m Sitting Next to a Republican chronicles the everyday travails and triumphs of the plucky conservatives marooned in the liberal bastions that loathe them, from Manhattan to Hollywood, to all the noxious places in between. Surrounded by the